Calm down. So deal volume plummetted 26%, to a mere 136 deals compared with October’s 183 (that’s a monthly record, by the way). November is typically a slower month for deal making, what with a four-day Thanksgiving holiday diverting attention away from healthcare transactions. This November’s deal volume bested last year’s results by 24% (110 deals), at least.

This is still the fourth quarter, after all, and December 31st is looming on the horizon. We expect to see some late-in-the-month action move the quarter’s goal posts toward higher ground. Last year’s fourth quarter ended with 396 transactions, virtually dead even with Q4:16’s 397 deals. We’ll likely beat those totals in 2018. 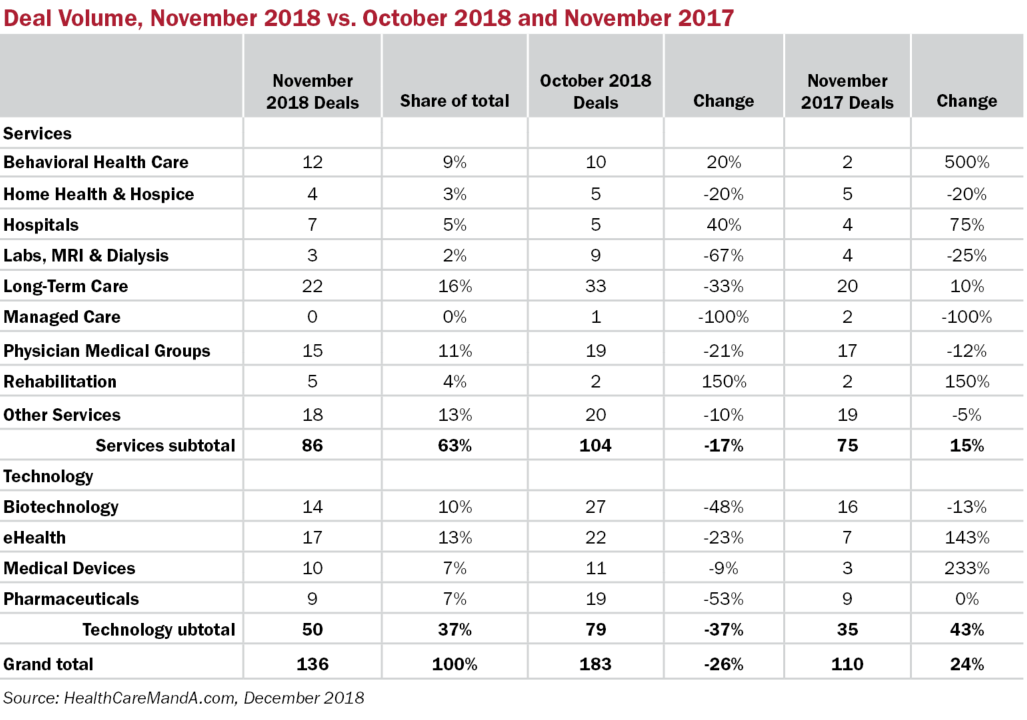 There were definitely some bright spots among the sectors last month. Behavioral Health Care turned in a strong perfomance, up 20% compared with October, and 500% versus the year-ago period. Acadia Healthcare (NASDAQ: ACHC) and BayMark Healthcare each announced two acquisitions and the usual cavalcade of private equity firms—such as Clearview Capital, Pharos Capital and WindRose Health Investors—got in on the action. This sector has already had a record year, with 85 deals on the books, up 52% compared with 56 deals in 2017.

The once-dormant Medical Device sector has picked up again in 2018, and November’s 10 deals represent a 233% increase over last November. Deal volume for 2018 now stands at 116 transactions, already 7% ahead of last year’s total of 108.

Hospital acquisitions, which are currently 14% lower than last year (71 vs. 83 deals), showed a slight bump in November. At just seven deals, any change creates waves, so a 75% spike compared with November 2017’s four deals shouldn’t be exaggerated. Given the financial stress this sector is undergoing, last month’s activity may reflect the rush to close the smaller deals with standalone community-based hospitals as the target before year’s end. 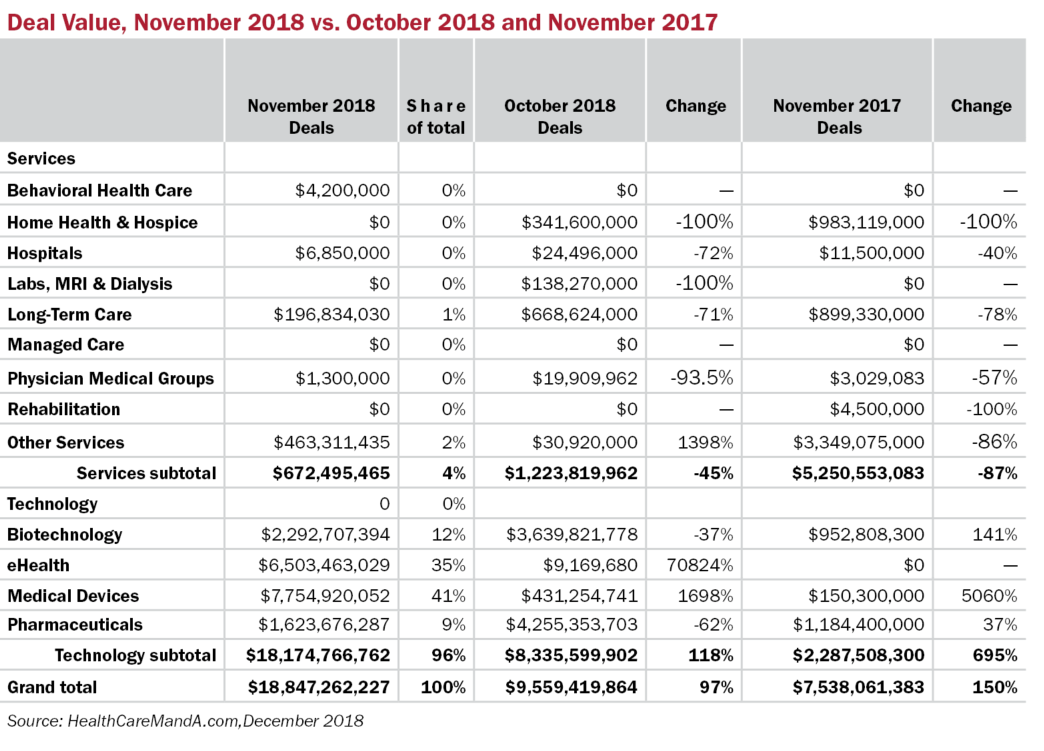 Spending for the month was downright robust at $18.8 billion. The total exceeded October’s financials by 97% and last November’s results by 150%.

December is off to a busy start, with about 20 deals announced in the first week. Whatever happens this month will likely be driven by year-end deadlines. At least we’re not dealing with sequestration (remember that, in January 2013?), new healthcare exchanges and the like.

Looking to January 2019, a new Congress will be sworn in, with the House controlled by Democrats and the Senate by Republicans. (Nothing seems to control the White House.) If you thought Congress was too divided to be effective in 2013, you’ve probably left the country by now. We’ll see what happens, as the President says. □