Hospital Deals Picked up in Q4:18

Mergers and acquisitions in the Hospital sector have risen steadily since a pronounced drop in the second quarter of 2018. The fourth quarter ended with 20 deals, up 18% quarter over quarter, but down 20% year over year. The 20 deals made up 25% of the 79 deals announced in the previous 12 months.

Community Health Systems, which has divested 43 underperforming facilities or ones in non-core markets in the past two years, sold seven hospitals in the fourth quarter of 2018. Four were standalone facilities throughout South Carolina, two were part of the Mary Black Health System that is also in South Carolina and the last was in Salem, New Jersey. The selling will continue in 2019, as CHS CEO Wayne Smith told investors at the 2019 J.P. Morgan Healthcare Conference. 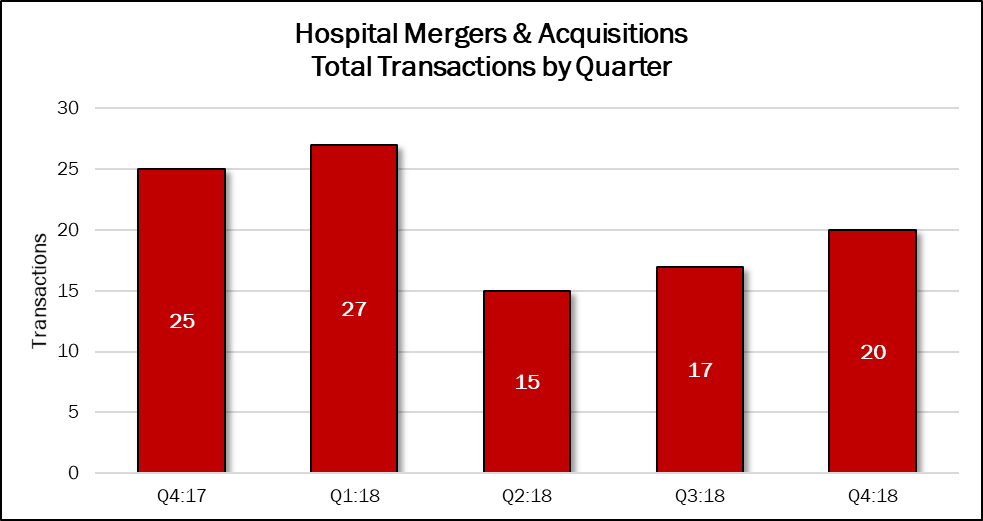 The sector’s three largest deals were all over the map, quite literally. Based in Sweden, Capio AB is a pan-European healthcare provider offering a broad range of medical, surgical and psychiatric healthcare services through its hospitals, specialist clinics and primary care units. It was acquired for approximately $903 million by Ramsay Generale de Sante, SA, the French subsidiary of Australia’s Ramsay Health Care Limited. The Paris-based Ramsay operates 124 institutions and centers, including 62 MCO facilities, 21 SSR clinics, 30 mental health clinics and 10 radiotherapy centers.

Bankruptcy filings are sparking some deals this quarter. The second largest deal by disclosed price resulted from the September 2018 bankruptcy of Verity Health, a six-hospital system in California formerly run by the Daughters of Charity. Santa Clara County (California) agreed to acquire two of the system’s hospitals, O’Connor Hospital (324 beds) in San Jose and St. Louise Regional Hospital (72 beds) in Gilroy, for $235 million. The county also operates Santa Clara Valley Medical Center (380 beds). The sale was announced in December 2018 and almost immediately was challenged by the state Attorney General. Verity’s four remaining hospitals have drawn a bid of $610 million from KPC Group and Verity is hoping to get more in an auction scheduled for February 2019.

Gilmore Memorial Hospital (95 beds) in Amory, Mississippi was acquired by Curae Health in September 2016 from Community Health Services. Curae, which was formed to support rural hospitals, filed for Chapter 11 bankruptcy protection in August 2018. North Mississippi Health Services, which operates six hospitals with a combined 1,000 beds, was the sole bidder in the auction and will pay $27.9 million for Gilmore Memorial. Both are not-for-profit operators.