What a quarter it was. Even with preliminary data, the numbers of deals and dollars spent in the second quarter of 2018 are impressive. The quarter began with a bang in April (176 deals), settled in May (136 deals) and slowed in June (122 deals). That still adds up to 432 transactions reported in the second quarter, up 1% compared with the first quarter, and 13% better than the same quarter in 2017.

The Services sectors accounted for 59% of the deal volume in Q1:18, five percentage points lower than in the previous quarter, and three percentage points lower than Q2:17. The Long-Term Care sector, which turned in 47 deals in April alone, posted gains of 28% compared with Q1:18 and 33% compared with Q2:17. Behavioral Health Care saw a 38% increase in deal volume over the previous quarter, and a 64% increase over Q2:17.

Among the Technology sectors, deal volume for eHealth targets spiked to 62 transactions, up 32% versus the first quarter and 38% versus a year ago. The Pharmaceutical sector has spent at least 18 months in the doldrums, waiting for the Trump administration’s tax overhaul to let the big companies repatriate cash from overseas. Since the corporate tax relief was passed in December 2017, deal volume has picked up in the sector, reaching a total of 40 transactions in the second quarter, up 54% over the previous quarter and 150% over the same quarter a year ago. 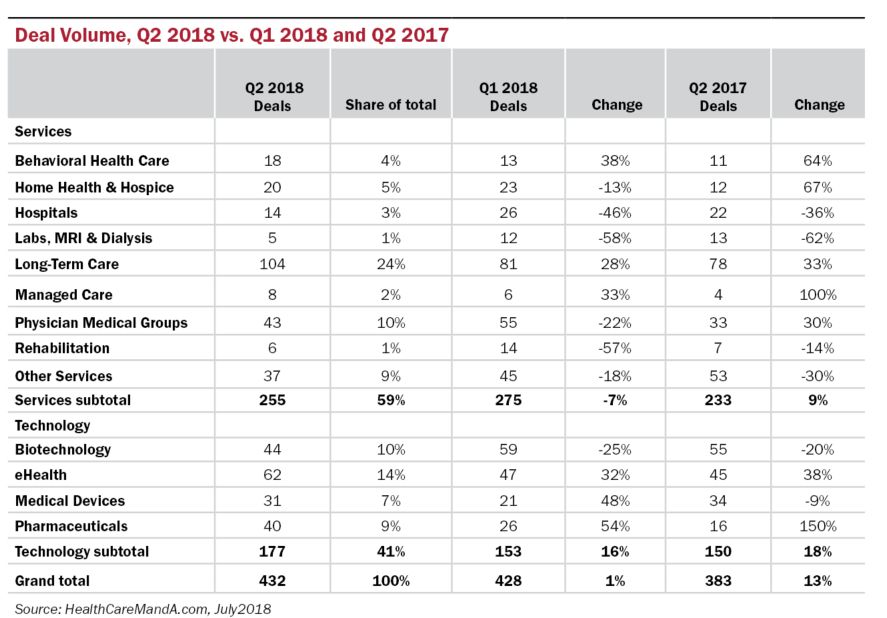 Spending was outsized, by any standard. Only a week after the quarter’s end, dollar volume stands at $143.5 billion, equal to the total dollar volume recorded in 2012. This early total is already 27% higher than the approximately $13.0 billion spent in the first quarter of 2018, and 46% higher than the same quarter a year ago.

Sixteen deals topped $1 billion in the quarter, the largest being Takeda Pharmaceutical‘s (TSE: 4502) $81.5 billion deal (including debt) for Shire plc (NASDAQ: SHPG). Without that transaction, the quarter’s total would be much less impressive, around $62.0 billion, a slump of 45% versus Q1:18 and even 37% behind Q2:17.

But deal volume is the real measure of the market’s strength, and some sectors are waning. The Hospital sector is losing steam at this point in the year, as Community Health Systems‘ (NYSE: CYH) stock hits new lows (trading at $3.12 on July 6), down 50% from its recent high of $6.18 on February 27. Rival Tenet Healthcare‘s (NYSE: THC) stock has fought its way up into the $30-range, trading at $35.23 on July 6, after its recent high of $38.35 on June 11. Transition is hard for those sectors the market is moving away from, but will benefit others greatly. Watch this space.