The Physician Medical Group (PMG) space is consolidating at a torrid pace, and the pace won’t slacken in 2018. Last year, deals for physician practices hit a record in the 21st century with 166 transactions, up 27% over the previous year’s 131 transactions. The momentum is indeed continuing into 2018, with eight more acquisitions announced in the first two weeks.

The real record was set in 1998, at 264 deals, but that was a very different time and market. Then, publicly traded management companies were building nationwide platforms of physicians. The market collapsed in 1999, and most of those transactions were unwound and the deal makers vowed, “Never again.”

Welcome to 2018. Value-based care and reimbursement is taking a growing hold on the healthcare industry. Even though the Centers for Medicare and Medicaid Services (CMS) voided the regulations for mandatory bundled payments for certain care in November 2017, the agency was back with new forms of bundled payments in Janaury 2018. Also in January, the Medicare Payment Advisory Commission (MedPAC) voted to recommend ending the Merit-based Incentive Payment System (MIPS), a fee-for-service model sanctioned under the Medicare Access and CHIP Reauthorization Act (MACRA).

Those regulatory changes are sending smaller physician groups and practices in search of larger entities, from multi-specialty practices backed by private equity to hospitals and health systems in their local market.

The continuous consolidation has the attention of healthcare providers, particularly at traditional health systems. If they weren’t paying attention a year ago, when Optum (NYSE: UNH) announced its acquisition of Surgical Care Affiliates, Inc. (then NASDAQ: SCAI) for $3.3 billion, they definitely noticed Optum’s December 2017 acquisition of DaVita Medical Group (NYSE: DVA) for $4.9 billion in cash. Optum also acquired The Advisory Board (NASDAQ: ABCO) and its clients for $1.3 billion in August.

That’s just the largest acquirer in the sector last year. The real action is taking place among the specialty practices. Sure, anesthesia, dermatology and radiology are still attracting investors, particularly private equity firms. After years of M&A in those specialties, the action is moving further downstream, into the still-fragmented practice areas such as dental, gastroenterology, multi-specialty groups, ophthalmology and orthopedics.

Jeff Swearingen, managing director at Edgemont Capital Partners, recently gave us his perspective. M&A among the hospital-based physician practices, including emergency medicine, hospitalists, radiology and anesthesia, matured a few years ago. “Oncology and cardiologists are in a unique segment,” Swearingen said, explaining how Edgemont breaks out its data.

“M&A in the office-based space really accelerated in 2017,” Swearingen said, and the frenetic pace is only building. Dermatology, dental, ophthalmology, GI, urology and orthopedics (spinal, in particular) are leading the way.

Our proprietary data bears that out. In 2017, the most popular specialties were dermatology (45 transactions), dental practices and support organizations (31) and primary care practices (23). Ophthalmology, multi-specialty groups and gastroenterology/anesthesia practices were hot targets, as well. (Note: We classify dental groups in our Other Services sector, but included them here.) 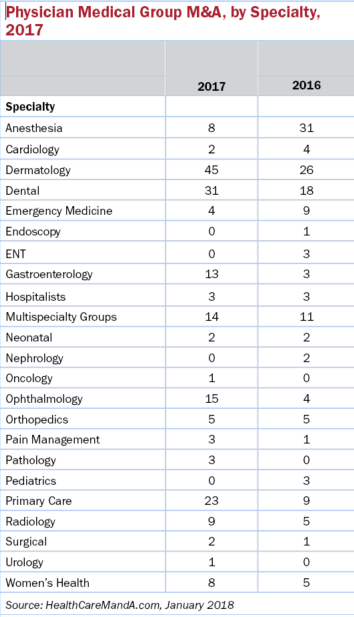 The deals will keep coming because scale and clout are more important than ever across all healthcare segments. The Physician Medical Group sector is still very fragmented, even with the publicly traded consolidators such as Mednax (NYSE: MD), TeamHealth and Envison Healthcare Corp. (NYSE: EVHC) still in acquisition mode. “Physician consolidation is critical for these practices to evolve, particularly under these [value-based] payment models,” Swearingen said. Buckle your seat belts, everyone.